The panel I bought was rated at 10 W and 12 V. I connected it to an unused old car battery to store the solar energy, using a charge controller. While we were driving, the battery was charged from a lighter socket, and on the campsites I used the lighter plug to connect the controller to the solar panel. That’s right — the panel has a lighter socket that allows it to be used directly, without any battery.

Here’s a photo I took when working on my first photovoltaic system. 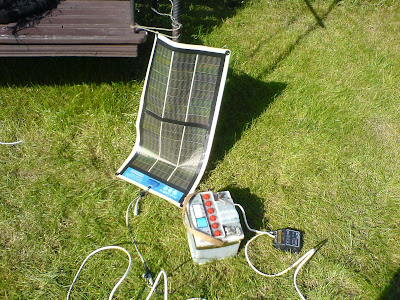 The panel I got was of little or no use during that trip. There was only one day when we spent two following nights in the same place, so only on that day I could use the solar panel to charge the battery. But since we used little energy from it (as the only load was a LED light) there was little capacity left to charge.

One thing I must say, is that those panels are an extremely off-grid power sources. If you’re looking for a power source that you can carry with you while hiking, use to charge your cellphone or GPS receiver, you need nothing more than such flexible panel.

A typical solar system would require a solar photovoltaic panel, battery and charge controller to work. This solar panel, if equipped with lighter socket, requires nothing more.

Those panels are much more expensive than standard ones. It seems they cost two times more.

They require sunlight to work and that’s nothing uncommon in solar panels. But I found out that too much solar radiation (i.e. direct radiation to the entire solar panel) would cause the voltage in the panel to be too high for some 12V-powered devices to work. I found out that one of my cellphone chargers will work with this panel only when it was (the flexible solar panel, not the charger) partially covered with some cloth.

Those panels are said to be flexible and you’re told you can bend and roll them, but I am not sure if rolling and bending will not cause wear and, eventually, damage to the panels’ crystals.

Where to buy flexible solar panels?

You can find flexible solar panels on eBay (US

), but also in many other places.